If you’ve ever been through the Gatlinburg area, you know that Tennessee has some of the most beautiful mountain ranges in the country. As part of the greater Appalachian mountains on the eastern ridge of the United States, the Great Smoky Mountains in eastern Tennessee and western North Carolina proudly offer their own distinct bluish-smoky hue.

Beyond the epic experiences of Dollywood, backcountry moonshine, and the warmth of Southern hospitality, there’s just something about this mountain range that keeps folding us back in. What is it about the Smoky Mountains that feels so expansive, and what gives them that mystical smoky allure?

The Smoky Mountains are absolutely magical and a real treat to wake up to come sunrise, but why are the Smoky Mountains smoky? Let’s read on to explore the merging of history, science, and culture in this beautiful neck of the woods.

What’s the History Behind the Smoky Mountains? 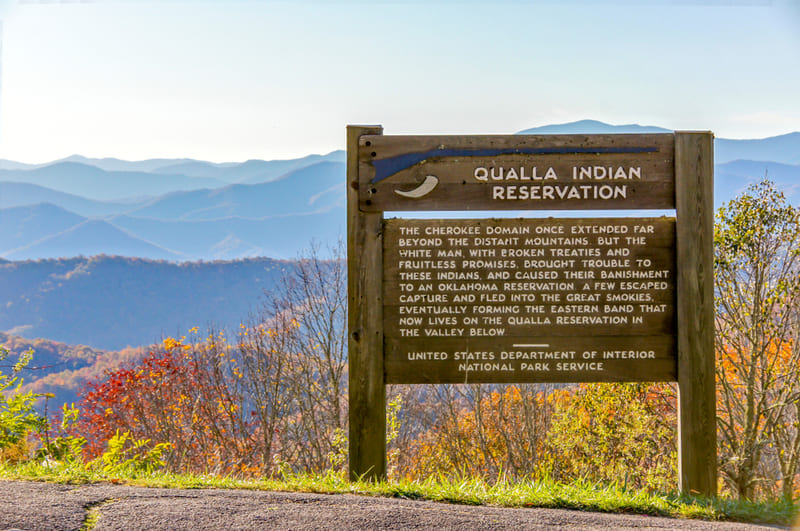 Long before European Americans came to the Appalachians, the area was the physical and spiritual home to a number of indigenous tribes, including the Cherokee – or the Anigiduwagi.

A matriarchal society, the Cherokee community was – and continues to be – deeply connected to the land here, naming it Shaconage, meaning “land of the blue smoke.”

As European Americans moved into the area, mostly from England, Scotland, and Ireland, the Smokies took on a new pioneering life. Inspired by the “land of the blue smoke,” these new folks in town proudly claimed these parts as the Great Smoky Mountains and the Blue Ridge Mountains.

Unfortunately, the area’s newest settlers clashed with and eventually banished this tribe to Oklahoma and Arkansas, thanks to a broken treaty. A few lucky folks persevered, fleeing into the Great Smokies for protection and sustenance, while others were protected through the efforts of indigenous advocate William H. Thomas.

Today the Cherokee Indians have been sequestered into a reservation just below the range of the national park, but the entire area still holds a palpable amount of spiritual meaning for this indigenous tribe. But why are these mountains so smoky that they were named the “land of the blue smoke?” Let’s move on!

So, Why are the Smoky Mountains Smoky? 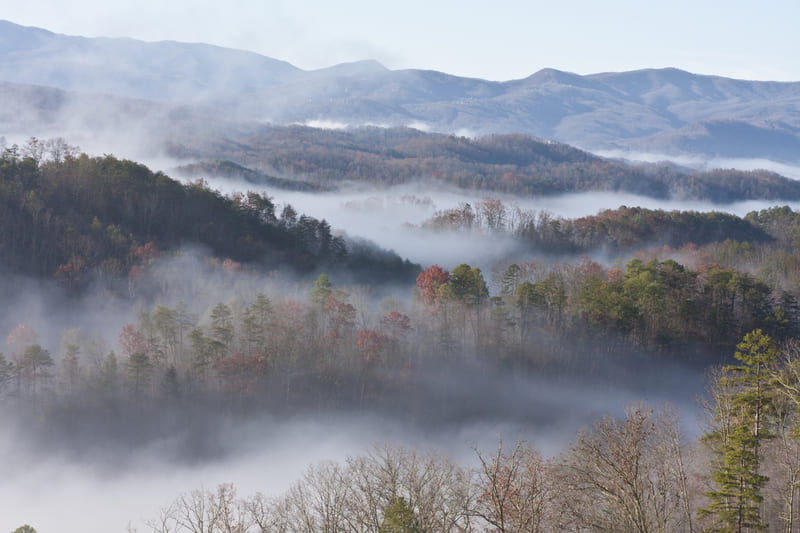 The real answer is a bit of a scientific curveball, so hold onto your glass of moonshine! Rather than being smoke, the effect actually comes from fog coming off of the native vegetation of the region’s massive landmarks.

While plants do release oxygen out into the air – remember that from science class!? – they actually go one step beyond this natural resource and release something called “volatile organic compounds,” or VOC.

Okay, we know the word “volatile” doesn’t instill a whole lot of confidence, but let us push up our glasses and explain. These chemicals have an extremely high vapor pressure that can cause vapors, or fog, in certain climates – and you guessed it, the Smoky Mountains are the perfect breeding ground for VOCs.

Have you ever smelled an evergreen? That fresh, piney scent comes from exactly this: VOCs (Think about that the next time you use pine essential oils or light a pine candle!). Thanks to the numerous plants and earthen materials in the forests, that smoky look has become one of the Great Smoky Mountains’ most iconic features.

Well if we said that the ‘volatile’ bit of VOCs relates to the evaporation process rather than an exploding mechanism you’ll probably be a little more relaxed on your next trip to the Smoky Mountains. It’s true that you might see this term on some household products but in that instance, it refers to the chemicals contained within it.

In terms of the VOCs in the Smoky Mountains, it is the carbon in the compounds that earns them the organic classification, as well as being the reason they evaporate.

Why Do Plants Produce VOCs?

Plants produce these compounds for a variety of purposes. Here’s a few of them:

But Should I be Concerned About Smog? It Looks Like Smog to Me! 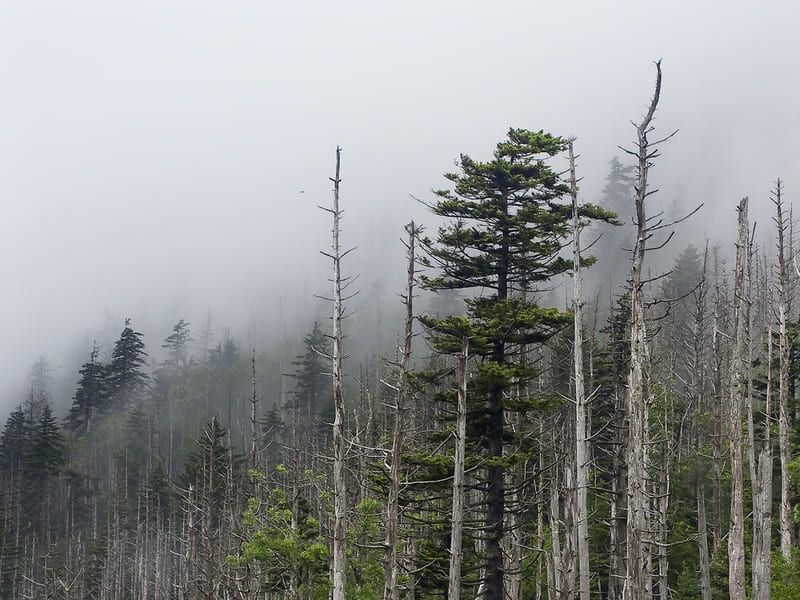 We understand your concern, but about 80% of the fog found in the Great Smoky Mountains comes from those volatile organic compounds mentioned above. Unfortunately, air pollution has contributed a small amount as humans have created lives and livelihoods within the Smoky Mountain range.

But the good news is that the National Park Service has been actively working to mitigate and reduce air pollution, with the Environmental Protection Agency setting an ambitious goal for all national parks to return to a completely natural fog by 2064.

You can do your part by using less energy in your appliances and making sure at least some of your power sources come via renewable resources. We can all work on this together!

Is this Condition Unique to the Smoky Mountains? 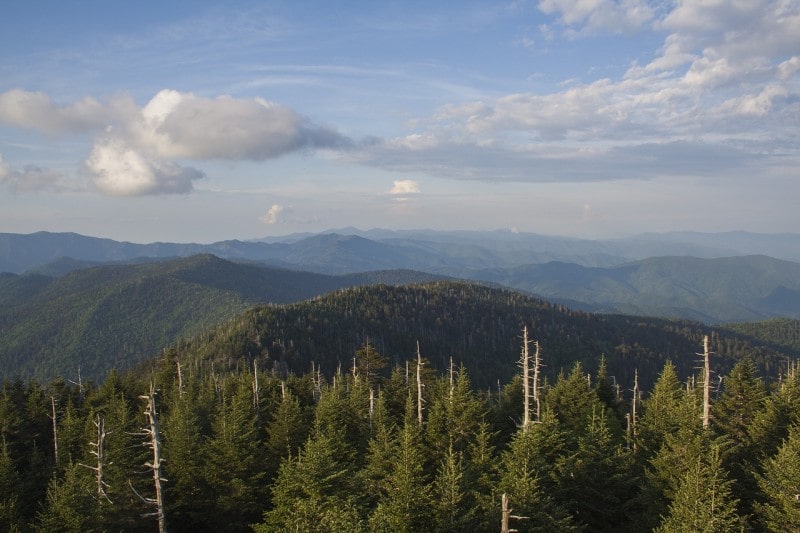 Apparently not, but the Smoky Mountains happen to have the perfect conditions for the haze to exist. Any other region with similar properties is capable of exhibiting very similar conditions.

It is worth considering though that the appearance of the haze also can depend largely on particular vantage points in the Smoky Mountains and how the light affects them.

Alright, Why are the Smoky Mountains Blue?

We already know that the Cherokee named this great region “the land of blue smoke,” but where does that blue tone come from? Interestingly, those same VOCs – volatile organic compounds – that allow the area’s vegetation to release those piney vapors also scatter fragments of blue light from the sky.

Just some tiny molecules doing their part to blow your mind! That’s why the Cherokee were so keen to call this phenomenon “blue smoke:” it truly looks like wafts of magical blue smoke emitting from deep within the mountains.

With the continuous rain, humidity, and stagnant air, you’re more likely to get fog – but in the depths of the Smoky Mountains, this natural optical illusion is the source of inspiration for countless songs, poems, prayers, and art.

Can you Tell Me More About the Cultural Impacts of the Smokies? 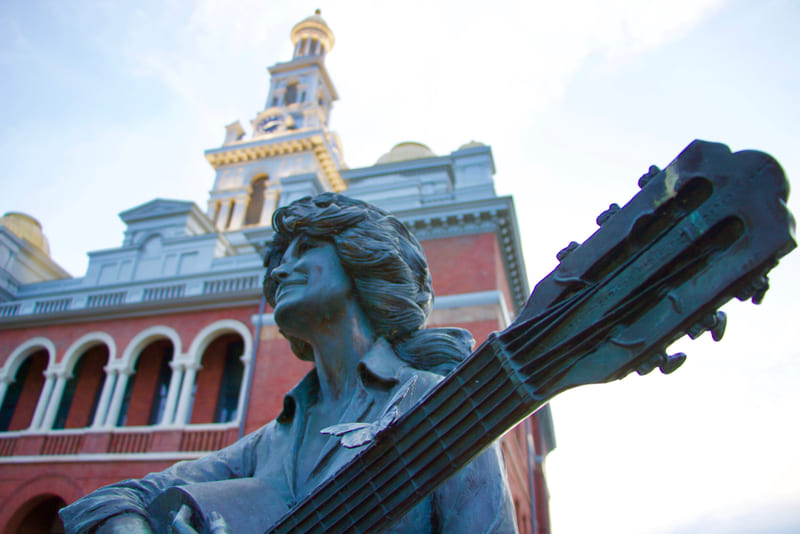 Sure! Plenty of bluegrass, country, and African American Southern Appalachian music has come out of the area inspired by the smoky blue hue of our mountains, our favorite being Dolly Parton’s “My Tennessee Mountain Home” off of her classic 1973 album of the same name.

Even “A Boy Named Sue” performed by Johnny Cash and written by children’s poet Shel Silverstein has its roots in the Great Smoky Mountains; the song ventures into the Gatlinburg area while following its protagonist along Tennessee.

And of course, some of our favorite art is inspired by the foggy Smoky Mountains, much of it on display on the 11-mile Gatlinburg stretch of Great Smoky Mountains Art & Crafts Loop.

We also recommend the novel Cold Mountain by Charles Frazier and Permanent Camp: Poems, Narratives, and Renderings from the Smokies by George Ellison (This book is a fantastic read!)

And maybe most importantly, there are some fantastic books about the experience of the Cherokee Indians in these blue mountains, one of our favorites being The Cherokee Perspective: Written By Eastern Cherokees, compiled by Laurence French and Jim Hornbuckle.

Look closely, and you’ll find that a great number of tunes, novels, poetry, and greater culture are inspired by the Great Smoky Mountains.

At the end of the day, the Smoky Mountains are not really ‘smoky’ at all! Still, the name of this great mountain region alone has done much to bring in tourists and make it one of the most-visited national parks that exist.

The amazing natural misty phenomenon of the surrounding mountains does nothing but add beauty, mystery, and allure to the already breathtaking scenery contained within the mountains.

So any potential visitors may head into the mountain area spanning two different states rest assured they aren’t moving into a wall of pollution!