There are lots of animals in the Smoky Mountains, and some of them might well be dangerous if you get too close to them. So if you decide on a trip to this magical region, be sure to keep your eyes peeled for its inhabitants at all times—especially the big cat variety!

We know coyotes roam around the mountain terrains, as do foxes, and the harmless bobcat. But are there mountain lions in the Smoky Mountains? This is not exactly a black-and-white issue, but the answer seems to lean towards a yes—albeit with a decidedly gray tinge.

Mountain Lions and the Smokies—a Few Things to Know

How Many Mountain Lions Are in the Smoky Mountains? 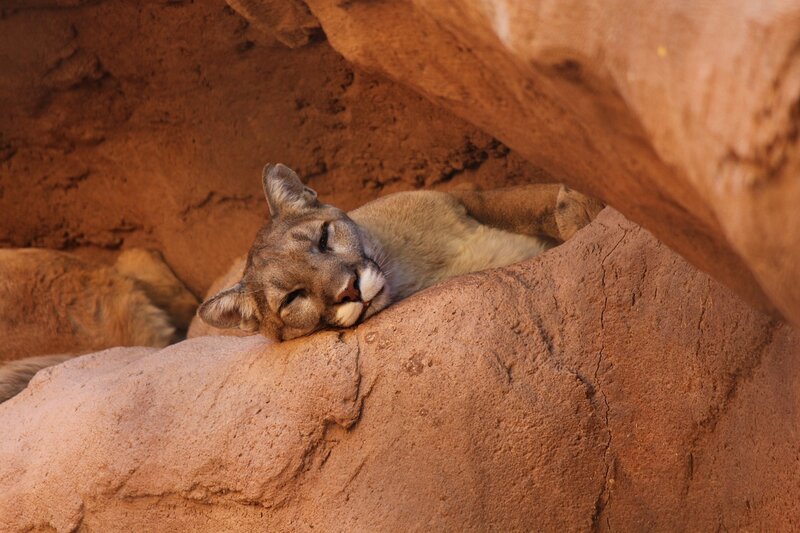 Actually, there aren’t that many these days. The animals were in fact thought to have disappeared from the region completely as long as 70 years ago.

However, it wasn’t until the U.S. Fish and Wildlife Service removed the mountain lion—otherwise known as the eastern cougar—from its list of Smoky Mountains endangered species list in 2018 that the debate started to rise anew.

The subspecies of mountain lion was removed from the government list in a bid to clarify the animal’s lack of significant presence in the park. The line of the government department is that evidence of the cats actually breeding within the park is necessary to warrant any listing.

This means they would need to be consistently finding new populations of young animals, although the last available evidence of this dates back to 1976. The National Park Service did undertake a large-scale study based on the sighting reports in 1977 though, concluding with the possibility that the animals may not have become extinct in the Smokies and had in fact survived.

This related only to very small numbers living in isolated and inaccessible mountain regions though, and it was deemed insufficient proof that breeding populations still roamed the vicinity.

So Why Are There So Many Consistent Sighting Reports?

And yet to confound this apparent attempt at a ‘closing statement’ on the animals’ habitation of the ‘Smoky Mountains,’ there have been consistent sightings of the cougars. One theory—which seems the most likely—attempts to explain this anomaly by suggesting that the cougars are merely transient through these regions.

Another theory, although a long shot according to experts, is that the cats make their way up from the Everglades. Hmmm. A slightly more feasible theory—although only a tad more—is that they find their way into Tennessee from the regions of North Dakota.

Either way, any amount of asking around locally will ensure more than a few mountain lion stories.

Like the tale of the sighting two decades back only half a mile out from the Sugarlands by a driving veterinarian more familiar with the animals than many. Then there was the wildlife photographer heading to Sugarlands from Cades Cove who caught sight of a cougar near the road but unfortunately couldn’t reach the camera in time.

In fact, many of the reports tend to come from sightings in and around these areas. They could well be just a trick of the light but the sightings are harder to dispute when reported by anyone who should ordinarily know the differences between a cougar and a bobcat.

But it seems that for as long as the official line has maintained the disappearance of the panther-like cats, tens of locals and park visitors alike seem intent on insisting otherwise. The debate still continues and has been fuelled by confirmed sightings of panther-like animals elsewhere in Tennessee.

The Tennessee Wildlife Resource Agency confirmed in 2015 that the presence of mountain lions in Tennessee had been detected for the first time in a century. This came courtesy of a man who captured some photos of the cougars just west of Nashville.

How Credible Are the Reports of Sightings?

A wildlife conservation professor from Virginia Tech by the name of Donald Linzey has a few insights to add to the mix. After close to half a century studying panthers and other mammals in the Smokies, Mr. Linzey typically investigates around six to eight potential sightings in the park every year.

Although the professor admits the lack of credibility related to many reported sightings, he says others are more difficult to write off—namely the previously-mentioned episode with the Knoxville veterinarian, who was used to treating captive cougars at his practice.

Linzey and his team have been on this one since 1970, following up on close to 200 sighting reports deemed credible. The majority of these sightings have been accompanied by evidence such as photos and footprints preserved in mud which at least confirm that cougars have been in the park.

Despite the evidence though, it does little to prove that a sustainable population of mountain lions still frequents the Smoky Mountains.

How Can Mountain Lions Be Recognized? 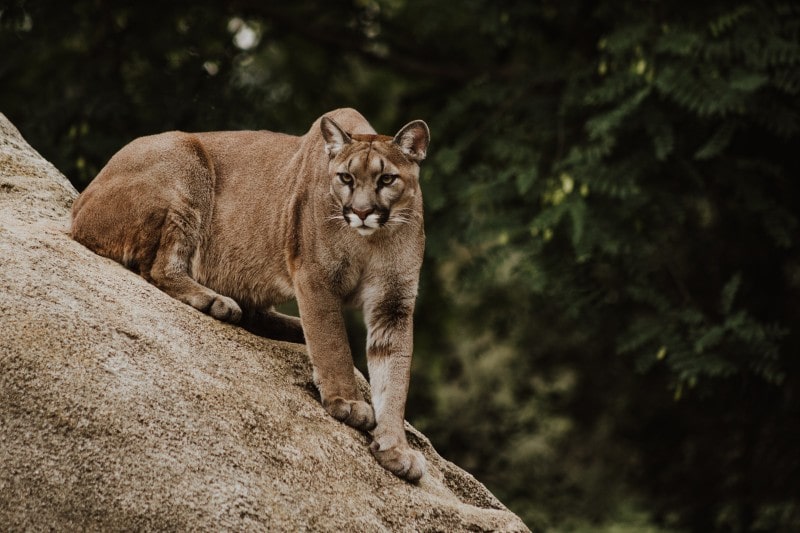 The reasonably large animals can reach up to seven feet long from nose to tail, weighing somewhere in the region of 100-140 pounds. They are identifiable from their brown-tinged or sometimes gray-tinged coats.

Like many cat species, the mountain lion is known to be generally shy around people. That said, the thing to remember is that these cats are predators and have been known to attack and kill humans.

In fact, there have been only 27 reported in the last century or so, with numerous other tales on top of that which may or may not be a tall tale.

Are There Mountain Lions in the Smoky Mountains? -The Bottom Line

At the end of the day, the reported sightings over the years may well relate to non-native cougars that have found their way into the region from the Midwest. Either that or many of these reports are simply false identifications by witnesses. Yet due to the sheer landmass covered by the Great Smoky Mountain National Park, it’s always difficult to know for sure.

However, there’s little doubt that forty-odd years after the last NPS study, the mystery still lingers. The last native cats in the park could well be long-gone—but it seems certain that the quest to find mountain lions in the park is far from over.

Curious about wildlife in the Smoky Mountains? Check out our look at whether or not you can find wolves and bears in the area!