The Great Smoky Mountains and the national park that forms their boundaries are home to some 500,000 acres of vast wilderness containing a wide and diverse range of wildlife. More than 65 mammal species are protected by the park environment, along with hundreds of bird species, reptiles, amphibians, and fish.

For many of these animals, the landscape and terrain of the Great Smoky Mountains National Park provide a much-needed sanctuary as their numbers dwindle. The cool and moist climate in the elevated regions of the Smoky Mountains along with the warmer lowlands regions, provide ideal conditions for many animal habitats.

The park plays a crucial role in the repopulation of areas where the numbers of various species are in decline. This is specifically true for many bird varieties, some of which have been listed as ‘Species of Concern’ due to rapidly-dwindling numbers.

One of the park’s main purposes is to protect the flora and fauna of the Smoky Mountain region and maintain it in a condition close to that before humans appeared on the scene.

Many of the animals manage to stay out of sight for all but the expert wildlife buff, and some are dangerous if you get too close. So let’s take a closer look at some of the animals that live in the Smoky Mountains.

10 Animals in the Smoky Mountains 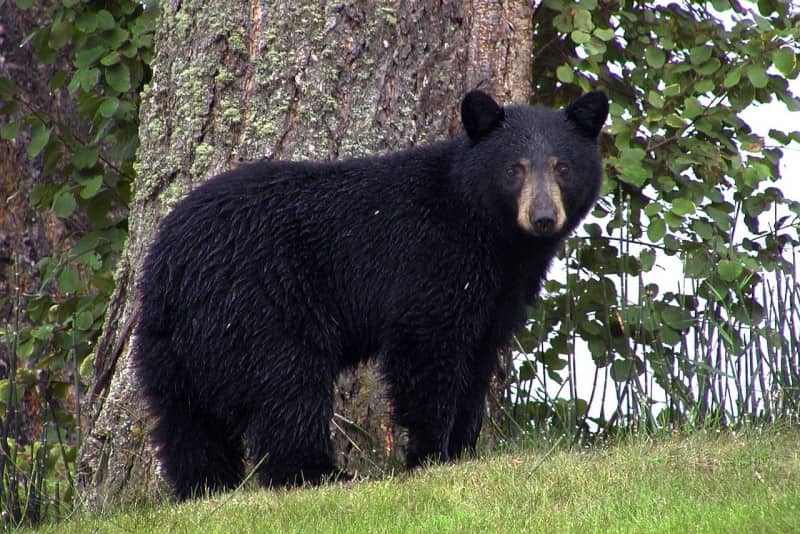 The Great Smoky Mountains National Park is actually one of the largest habitats for protected bears there is, with an estimated population in the region of 1,500 bears.

Many people head to the region hoping to catch a glimpse of these creatures, though there is no specific area of the 500,000-acre national park where you are guaranteed to spot a bear.

Late spring is when they are at their most active, and it is important that visitors are aware of the potential dangers that these large but cute animals may pose.

The bears hibernate during winter, so there’s little chance of catching a glimpse of one at that time. When they come out of hibernation they will eat virtually anything. Cautions should be taken during this time as Black bears are known to be aggressive when hungry. 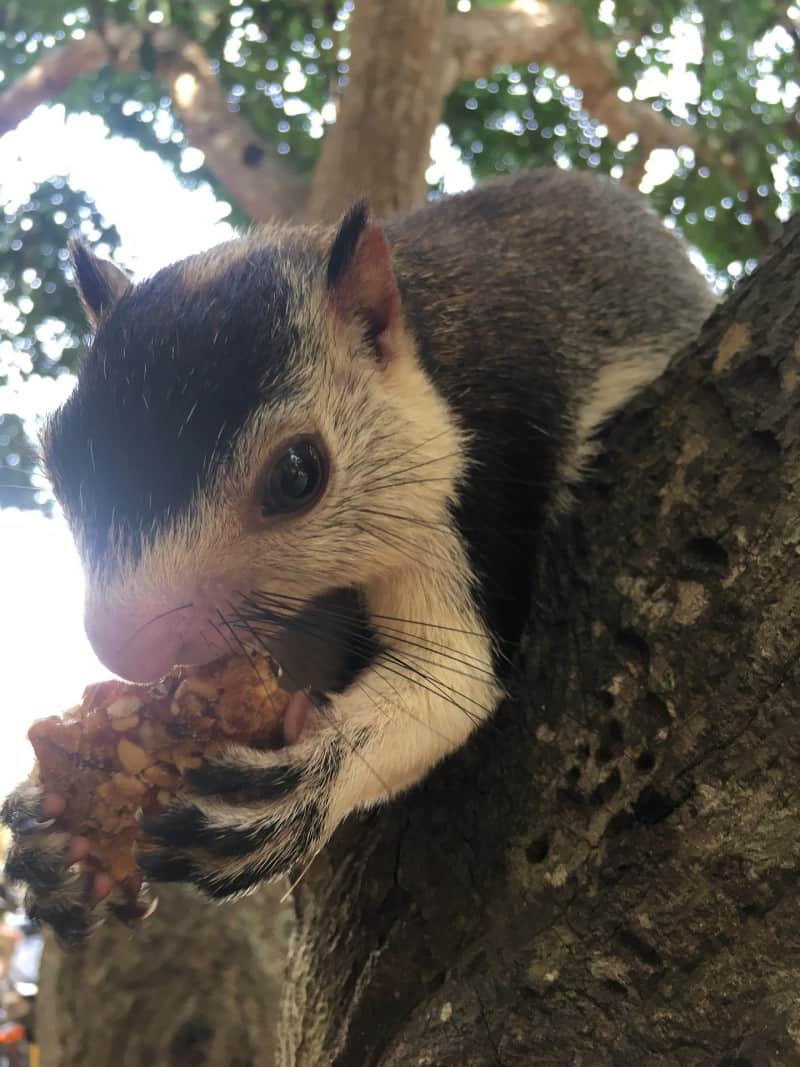 Northern flying squirrels are small, brownish-gray animals that thrive at high elevations, and unlike many other members of the squirrel family, they are strictly nocturnal.

In fact, at any time during the day, you are likely to see regular squirrels if you look up into the trees, particularly red of the red variety. But the flying squirrel is somewhat elusive and shy.

If you do think you have spotted one of these creatures though, they can be identified from their flattened tail and a loose fold of skin on each side of the body, which is the squirrel’s flying membrane.

The squirrels are listed as endangered subspecies today as their small populations have routinely fallen foul of the destruction and loss of habitat as well as other factors like pollution.

As it turns out these animals don’t actually fly as such—in fact, their tail serves as a kind of rudder which helps when the squirrel changes direction while leaping and gliding from tree to tree. 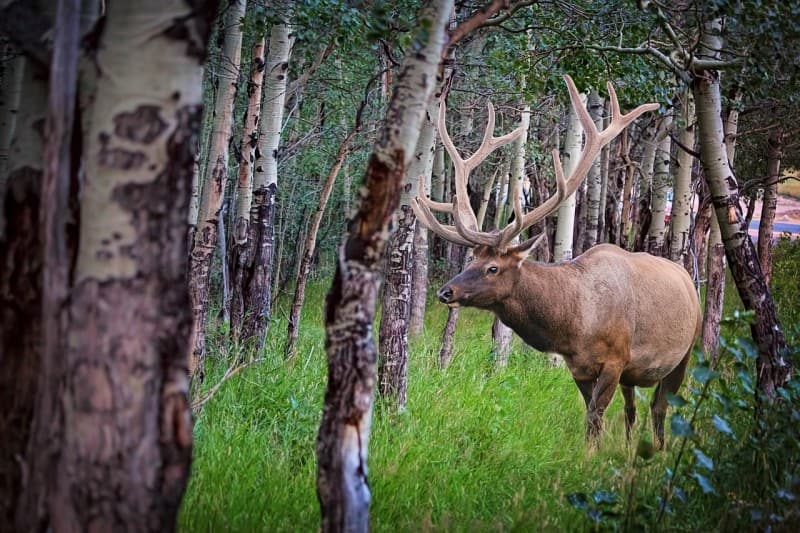 If you have it in mind that the bears are the largest and heaviest primates in the Smoky Mountains, then take heed of the elk.

To put that into perspective, while male black bears can average 250 pounds, an elk can weigh closer to 700 pounds, often reaching 5 feet in height. Needless to say, these animals can also be dangerous and are known to charge when feeling threatened. Thus, the park’s guidelines recommend staying at least 150 feet away from these animals.

Elk were reintroduced into the park roughly 20 years ago. The reason for this was that they were pretty much eradicated from the Smoky Mountains when settlers first appeared.

Most of the Elk is to be found in the Cataloochee region grazing in open meadows, but they are also often spotted on the park’s Tennessee side.

If you are looking to catch sight of one of these huge animals, they are usually around at either dawn or dusk looking for fresh wet pastures to graze.

September to October time is the annual mating season for the elks when it is common to see the bulls circling the cows into herds. 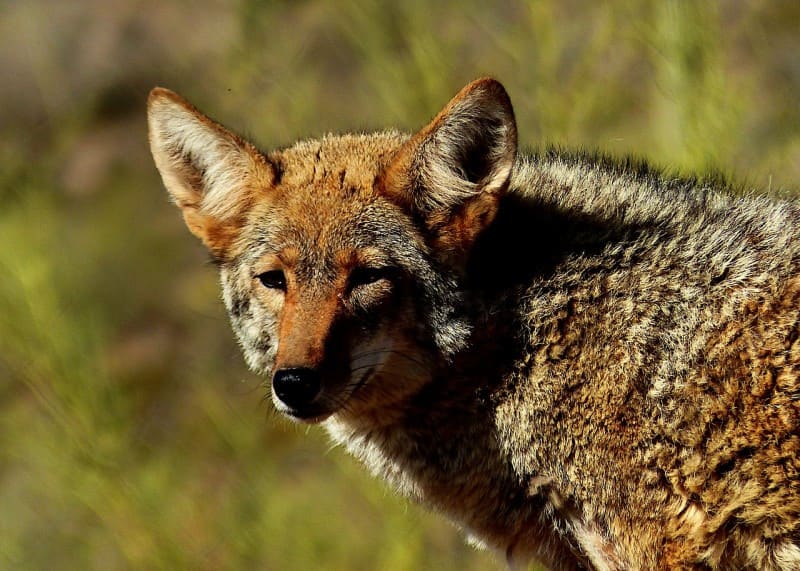 Coyotes inhabit all areas of the park but are commonly spotted around the region of Cades Cove. The animals are no threat to humans and are likely to make themselves scarce when they spot anyone if alone.

It’s not wise to get too close if you see a pack of them though, and they can run incredibly fast.

With slightly similar features to regular Collie dogs, coyotes are identifiable by their bushy tails and white underbellies. The animals can reach up to 4 feet in length and weigh around 50 pounds or so.

They are nocturnal and hunt at night—small animals individually and larger ones in packs—, and have been known to attack pets that encroach on their territory.

If you’re in the park anytime near nightfall, you may be lucky enough to spot or hear a coyote howling. 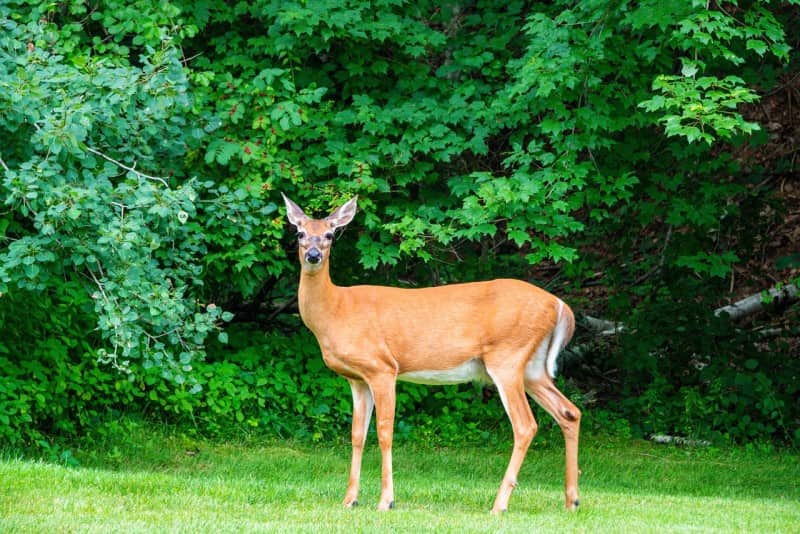 Another animal common to the region of the Smoky Mountains is the white-tailed deer. These animals tend to gravitate towards wooded areas and meadows looking for grass and other foliage to graze on.

Cades Cove and open areas like Cataloochee are common places to spot the animals, although there may well be a chance of a glimpse from the forest hiking trails.

The deer are sometimes known as bucks in the mountain regions, and the best time to try and catch a glimpse of these gentle creatures is either early morning or around sunset, as they are most active at night.

Every spring the male deer grow antler-type horns which make them more easily identifiable due to their unevenness.

The primary reason for the horns is to do battle with other deer as part of the mating ritual. Come winter they drop the horns and eventually grow new ones for the next season. 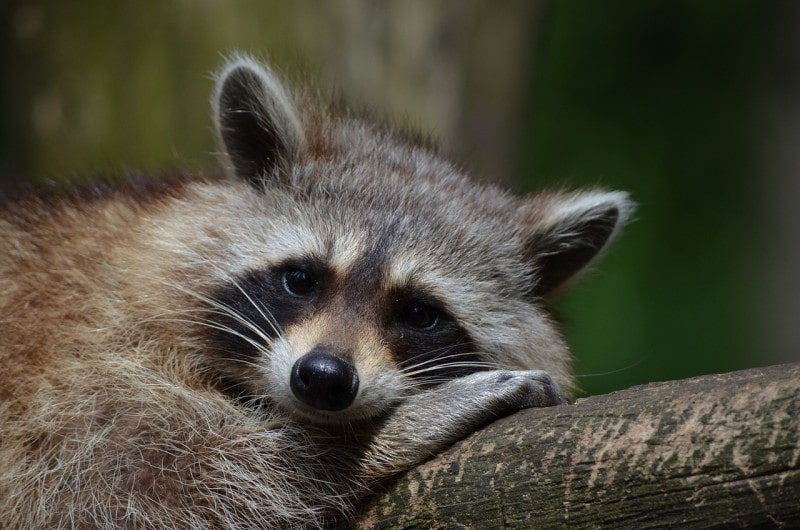 Raccoons are undoubtedly charming and cute-looking furry gray animals with ringed tails and what looks like a black mask across their eyes. While they are undoubtedly small, cute, and furry, raccoons are known to carry some serious infectious diseases such as rabies.

On top of that these critters tend to pillage through food, especially in campground areas and where there is likely to be any unsecured food left around by humans. The raccoons are apparently just slightly less of a problem than bears when it comes to this issue, and they can be annoying for some visitors.

If they don’t manage to find any of your leftovers these animals more commonly feed on frogs or crayfish, as well as pillaging from the nests of both birds and turtles.

Come fall, the raccoons will switch to a diet rich in acorns in order to store up some fat for the winter. 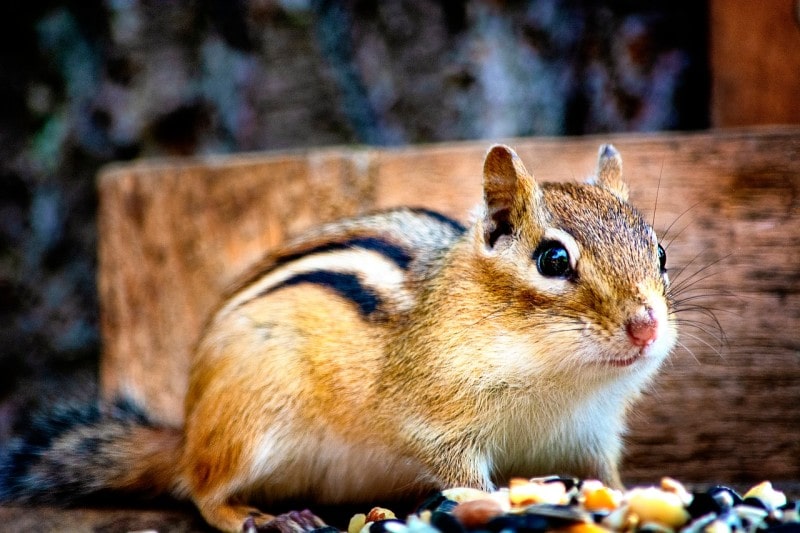 The Smoky Mountains are also home to eastern chipmunks, the distant relatives of squirrels and woodchucks.

The chipmunks are quite commonly spotted in the park, especially around the Cades Cove area in the wooded tree regions, but they are also seen around grassy and rocky spots.

The chipmunk’s diet consists of nuts, seeds, fruits, and plants as well as insects, worms, and even bird eggs, all of which are in plentiful supply in the protected habitat of the Smoky Mountains.

The eastern chipmunk is like any other in that it stores food in pouches in its cheeks, and though small, this animal is one of the easier ones to spot when visiting the park. 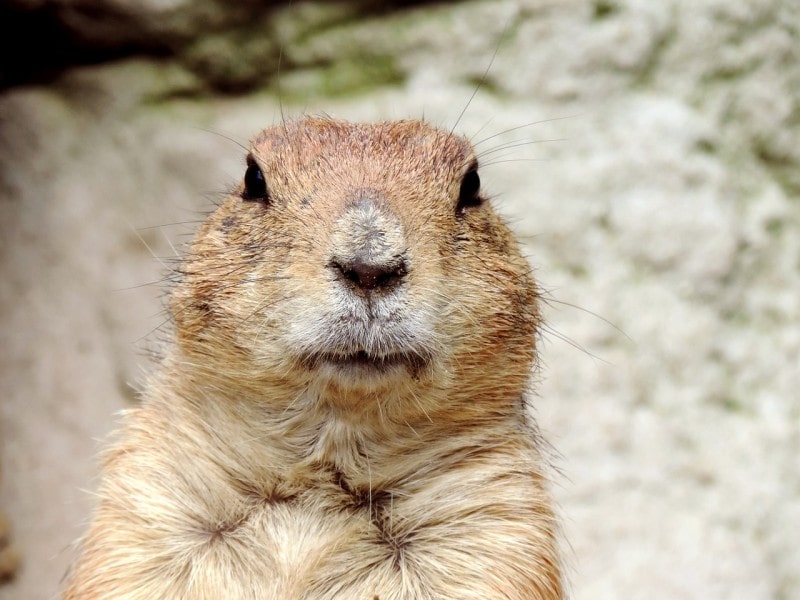 The groundhog has been given various names over the years such as the whistle-pig and woodchuck. In fact, the animal is still commonly known as the woodchuck.

The groundhog is known for its distinct whistle of two shrill notes through gritted teeth, hence its original moniker of whistle pig.

The groundhog is actually quite a bit bigger than its red and gray relatives and typically reaches about 18 inches in size, distinguishable by its black feet.

The groundhog digs out and lives in its own burrow with different ‘rooms’. This den serves as a safe winter haven, and the animals are typically solitary most of the time.

Aside from the burrows they call home, the groundhog can also be seen climbing trees. It survives on grasses like clover and alfalfa as well as buds, stems, and leaves.

The groundhog will hibernate throughout the winter, and once it resurfaces, visitors to the Smokies will find the groundhog most abundant in the grassy meadows of Cades Cove. 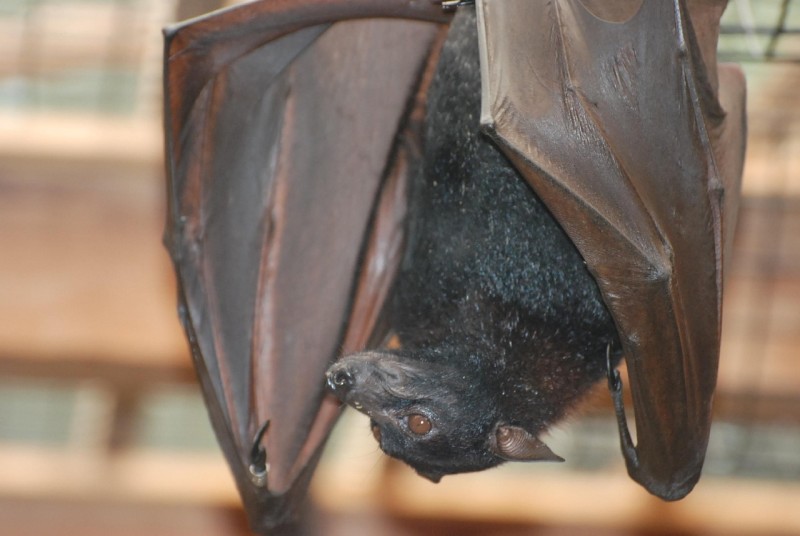 The Smoky Mountains National Park is deemed to contain at least eleven different species of bats. Of these eleven, seven are known to hibernate in winter while the other four species will migrate.

The bats live in the park’s caves and feed on insects, although entering the critical cave habitat is not permitted for visitors as the disturbance is detrimental to the bats.

The species most commonly seen in the park include the big brown bat, the eastern red bat, and the eastern pipistrelle. 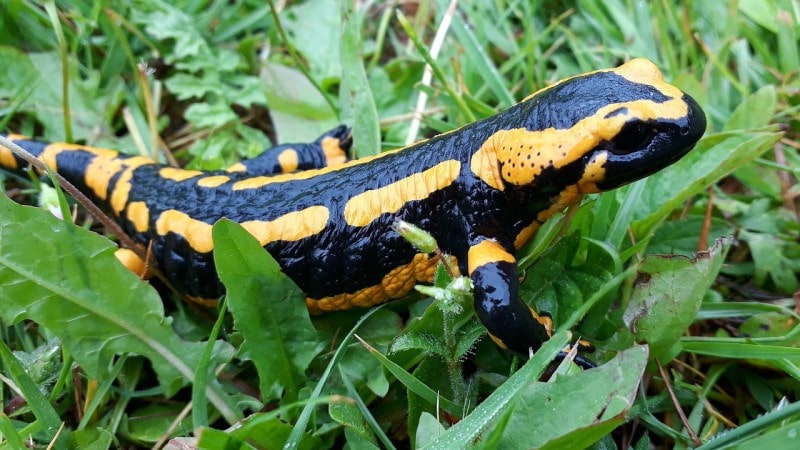 Smoky Mountains National Park is often referred to as the “Salamander Capital of the World” due to the high volumes of the creatures in the region.

The park is home to more than 30 different species of salamander, including a lungless strain that is the product of evolutionary diversification. The lungless salamanders draw in and emanate oxygen and carbon dioxide through their skin.

Salamanders are commonly found near water features like waterfalls and creeks as well as under rocks.