Tennessee’s Smoky Mountain town Pigeon Forge can be found off the I-40 in close vicinity to various other towns and attractions in the region.

The nearest town comes by way of Sevierville four miles to the north, and the Great Smoky Mountains National Park is a mere 5 miles from Pigeon Forge.

Knoxville is just over 30 miles away, and 2 other significant interstates run near Pigeon Forge by way of the I-75 and the I-81.

But if you are looking for other ways to get to this scenic mountain town in Tennesee’s Smoky Mountain region, the bad news is there’s no airport aside from the non-commercial Gatlinburg-Pigeon Forge Airport. Unfortunately for tourists this facility only operates private and cargo flights.

Yet Pigeon Forge is served by Knoxville McGhee Tyson Airport, the nearest option for flying in or out of the area resembling anything like a major airport. 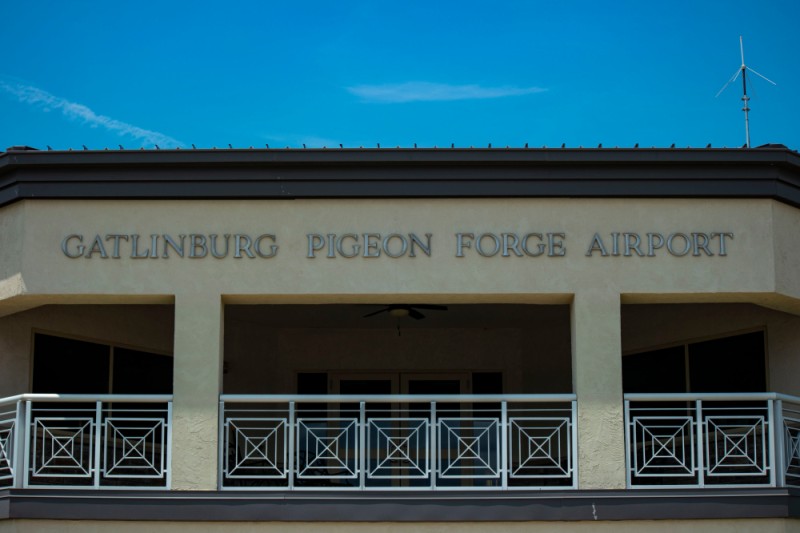 There are still other aviation options worth considering for getting to Pigeon Forge. In fact, there are actually four airports close to Pigeon Forge within a hundred-mile range, which we intend to look more closely at in this post.

At these airports, you’ll find car rentals from companies like Avis, Alamo, Hertz, Payless, and Enterprise to name a few. Let’s have a closer look at four airports near Pigeon Forge.

If you are intending to fly into the vicinity of Pigeon Forge keep in mind the fact that there are no direct connections from any of the nearby airports. It is possible to get so far without a car by the subway and the bus.

But after that you’ll still need to drive or get a taxi to Pigeon Forge, so to be honest your best bet would be a car rental for the whole connection.

TYS is the nearest commercial airport to Pigeon Forge just 24.5 miles away. The airport is actually 12 miles out of the Knoxville city centre, and as the largest by far in the region it is considered as the main air facility in East Tennessee and operates direct flights to more than 20 cities.

You can see some of the main commercial U.S. flights HERE.

The airport handles commercial, cargo, and military aviation aspects of flights and is home to a fixed base operator (FBO) by way of TAC Air.

The FBO is responsible for providing fuel and various other services to commercial carriers, although corporate aviation, charter flights, flight schools, and hobbyists are all accommodated here.

McGhee Tyson Airport and the aviation industry in general are some of the main employers in East Tennessee and this facility employs close to 3,000 people.

The airport is one of the most easily-accessible regional airports there is and operates over 100 daily flights including more than 20 mon-stop locations.

Short and long-term parking is available as well as an extensive range of car rentals, as well as nearby accommodation options.

Asheville AVL is just over 60 miles from Pigeon Forge. It will allow you to get within reasonably close proximity of the scenic Tennessee mountain town and may also be the preferred airport for anyone exploring the North Carolina side of the Smoky Mountains.

The airport is also 60 miles in the other direction from Cherokee Park’s main entrance.

Amenities at the airport include great dining featuring locally-brewed craft beer. But just to demonstrate the diversity of this airport-you can also check out art galleries and catch some live music if you have the time.

At least five carriers operate out of the facility as do non-stop services to approximately 20 locations such as Atlanta, Dallas, Chicago, Denver, New York, and Washington.

The five airlines operating out of the airport include American, Allegiant, Delta, Elite, and United Airlines.

The Tri-Cities Airport is slightly further out at about 80 miles from Pigeon Forge off the I-81 (Exit 63).

It presents yet another aviation option in the region, this time in Northeast Tennessee’s Blountville, which is something of a historic stop-off point for westbound travellers and a former stagecoach stop.

It operates 3 carriers by way of American Airlines, Delta, and allegiant runs five non-stop flights to various cities. A full range of rental car options is available at this airport

Within the 100-mile-radius of Pigeon Forge at 98 miles is the International Airport facility of Greenville. This is an international facility providing quick and efficient commercial air transportation services to passengers as well as cargo.

The airport is close to a 3-hour drive away from Pigeon Forge, which would likely be the best transfer option for most travelers in the region.

Greenville has something of a well-earned reputation for safety and customer service, not to mention some award-winning amenities like the Escape Lounge, fine dining, and one of the most extensive art collections you are likely to see at any small airport in the country.

GSP was actually the first airport in America to feature an Airside Garden, and it continues to be an innovative model for new global airport construction.

With over 100 daily non-stop flights to various destinations serviced by seven airlines including American Airlines, United, Delta, Southwest, and Contour, you can get to anywhere from this airport.