Gatlinburg, along with its sister cities of Pigeon Forge and Sevierville, is one of Tennessee’s most-visited destinations. Today, millions of people from all over the world come to Gatlinburg every year. But the friendly mountain town at the doorstep of the Great Smoky Mountains wasn’t always a tourist landmark.

We will take a closer look at the history of Gatlinburg, including how some of the world-famous tourist attractions came to be: 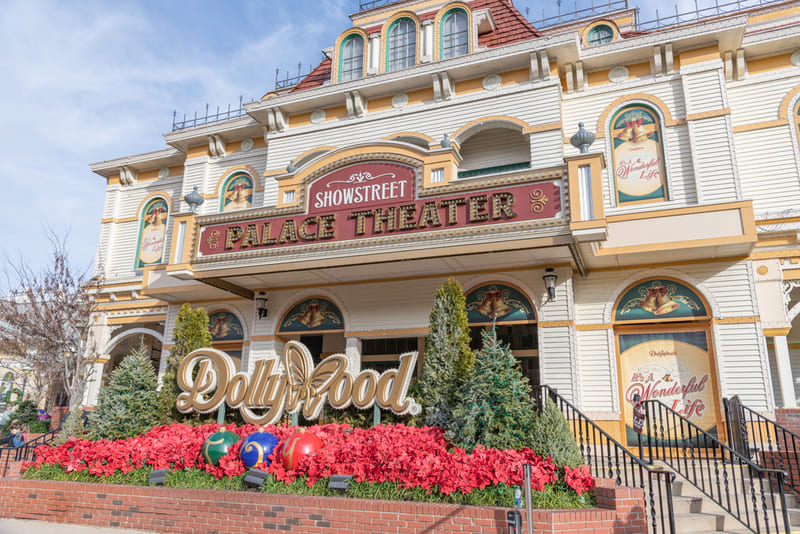 When was Gatlinburg Founded? 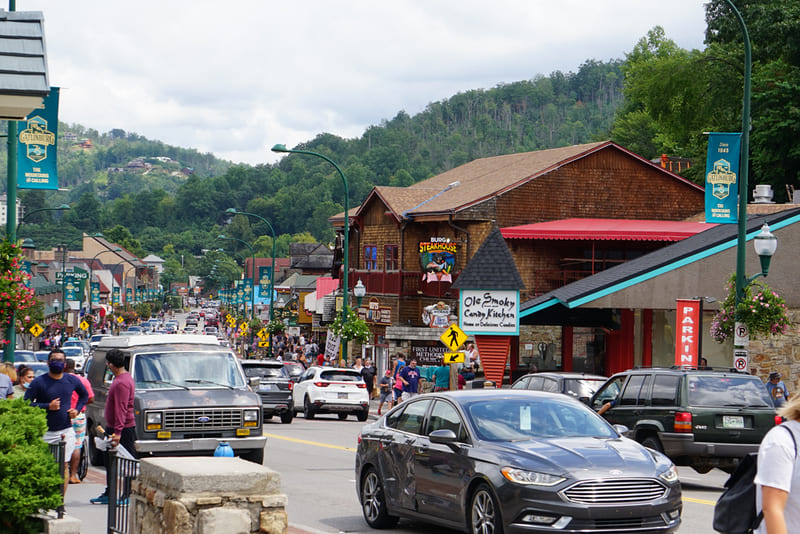 Gatlinburg was officially named in 1856, when the town’s first post office was established inside Ratford C. Gatlin’s general store. Despite having the town named in his honor, Gatlin was a controversial figure.

Having settled in the area in 1854, Gatlin was an eccentric preacher who founded the Gatlinite Baptist Church. There are several stories regarding Gatlin, with some claiming he was a democrat living in a republican area whose pro-secession views clashed with those of locals.

According to The Smokies, a blood feud with a local family resulted in Gatlin’s barn being burned down and his livestock being slaughtered, before he was branded a Confederate sympathizer. Either way, there was undeniable tension between Gatlin and the other residents of the town, and he was eventually driven out in 1859.

Although Gatlinburg was named so in the 1850s, it had already existed as a community named White Oaks Flats since the early 19th century, and its fascinating history dates even further back in time.

The Early History of Gatlinburg 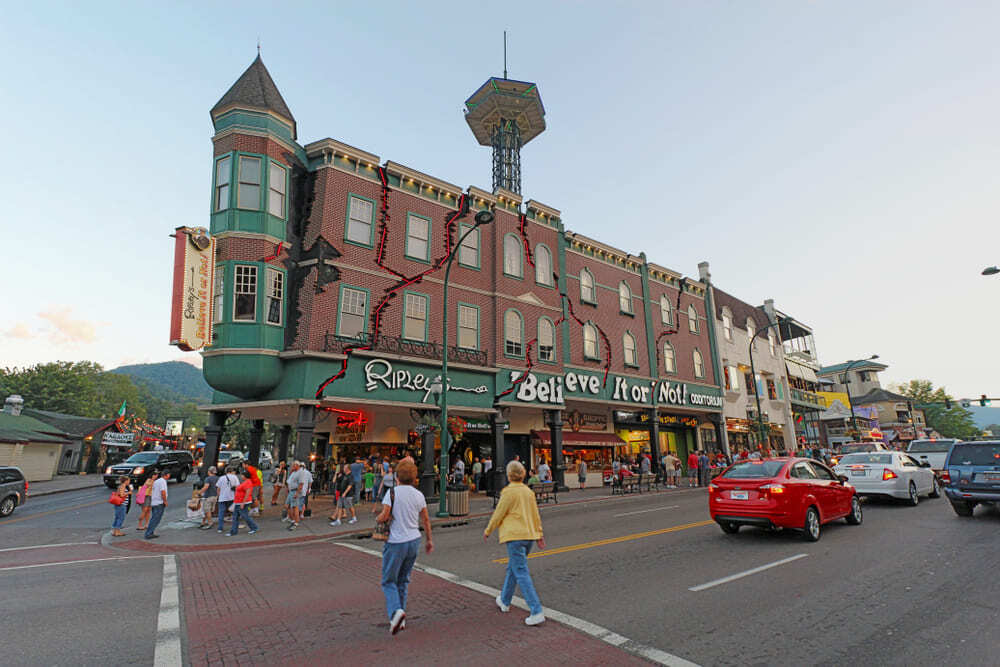 The first inhabitants of Gatlinburg were Native Americans. Cherokee hunters in the area hunted the game flourishing in the Great Smoky Mountains by using a footpath known as the Indian Gap Trail, which followed the West Fork of the Little Pigeon River (via Elk Spring Resort).

Fur traders and trappers occasionally passed through or camped in the area, but there was no white settlement until the 1800s.

Though today Gatlinburg is considered one of Tennessee’s premier destinations, the mountain town almost wasn’t located in Tennessee. In the 18th century, the local territory was called Franklin, which petitioned to become the 14th state admitted to the Union.

Franklin formed its own independent territory when the request was denied in 1784. It collapsed four years later, making way for the state of Tennessee as it’s known today. 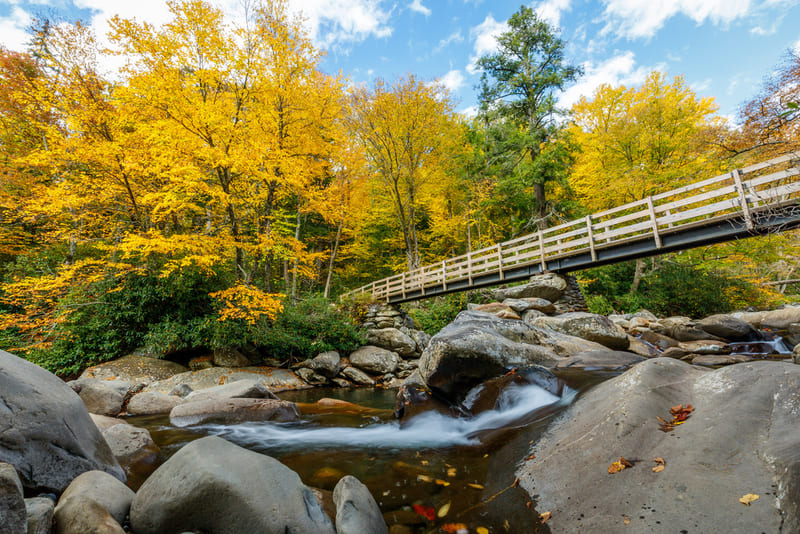 The first white settlers to the area were Martha Jane Huskey Ogle and her seven children. Originally from South Carolina, the Ogle family built a cabin in what is today Downtown Gatlinburg (the building is still standing at the Arrowmont School of Arts & Crafts).

Martha’s husband William Ogle began work on the cabin in 1802, intending to return to South Carolina and collect his family and bring them back to Tennessee. But when he arrived back in South Carolina in 1803, he fell ill with malaria and died, prompting his family to travel on without him and finish the cabin.

The area came to be known as White Oaks Flats because of the local landscape, which heavily featured native white oak trees. Soon, other pioneer settlers arrived in the area, along with veterans from the Revolutionary War who had come from North Carolina.

At the time, North Carolina was granted 50 acres of land in Tennessee to veterans as a thank you for their service. Some of the most notable veterans were Timothy Reagan, John Ownby, and Henry Bohanon, whose descendants still live in Gatlinburg today.

Tennessee joined the Confederacy in June 1861, but the majority of Gatlinburg residents were actually pro-Union during the Civil War. This is because most Gatlinburg residents did not own slaves, and were suspicious of wealthy figures in the South who wanted secession.

Confederate troops led by Colonel William Holland Thomas briefly occupied Gatlinburg in 1863 when they arrived to protect the saltpeter mines near the Tennessee-North Carolina border. The Confederate troops built a small fort but were soon driven out by Union troops marching south from Knoxville and Sevierville.

How did Gatlinburg evolve? 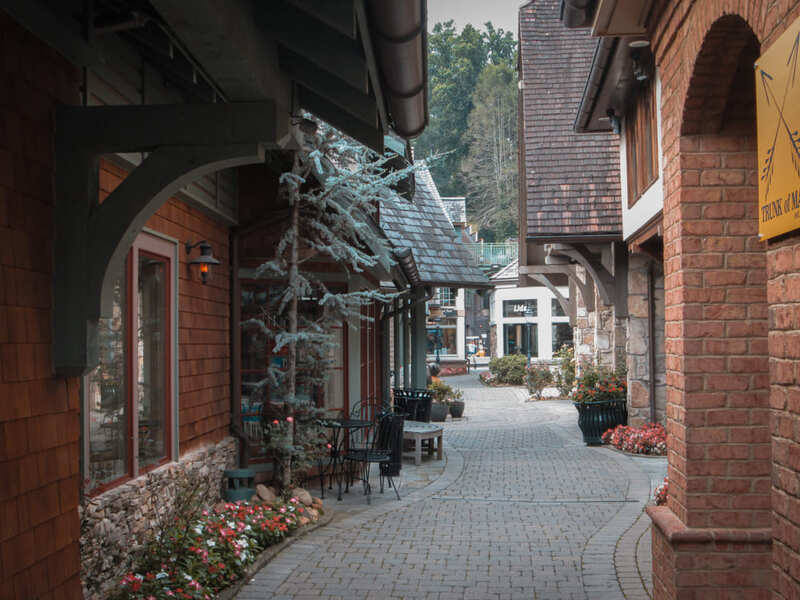 The first public building to be constructed was the White Oaks Baptist Church, which was built in 1835. The majority of settlers were Presbyterian, but they built a Baptist church because of persuasion by Baptist missionaries passing through the area.

Other buildings soon followed and the first store was established by Noah Ogle in 1850. After moving to the intersection of River Road and the Elkmont Highway in 1910, the store was taken over by his son, Ephraim E. Ogle, in 1916. This became the E.E. Ogle and Company Store.

In 1912, Gatlinburg’s first school was opened by a women’s organization known as Phi Beta Phi. There were only 13 students enrolled when the school first opened, but the number soon grew to over 130. The school had a strong focus on arts and crafts, encouraging the “cottage crafts industry” movement which was thriving at the time.

Eventually, the school evolved into the Arrowmont School of Arts and Crafts, which is still standing today. The Arts & Crafts Community continues to uphold a strong legacy in the area.

Around the turn of the century, the logging industry boomed in the Great Smokies and Southern Appalachians. A sawmill was constructed in Gatlinburg in 1900 by Andrew Jackson Huff. The extensive lumbering led to a push for a national park to be founded in the area.

Eventually, the Great Smoky Mountains National Park was formed on privately owned land, which was then transferred to federal ownership in 1934. President Franklin Delano Roosevelt visited the park and famously made a speech from the Roosevelt Monument at Newfound Gap in 1940, just before America’s entry into the Second World War.

“There are trees here that stood before our forefathers ever came to this continent; there are brooks that still run as clear as on the day the first pioneer cupped his hand and drank from them,” the President declared in his speech. “In this Park, we shall conserve these trees, the pine, the red-bud, the dogwood, the azalea, the rhododendron, the trout and the thrush for the happiness of the American people.”

Other descendants of the Ogle family ran the general store as time went on, and eventually, the store expanded to selling almost everything the residents might need.

Modern members of the Ogle family have continued to play a role in the development of Gatlinburg, even though the old general store was demolished in the 1970s. Today, the Mountain Mall stands in its place.

What is Gatlinburg Famous For?

However, over the years, the local tourism industry has evolved, as has public perception of Gatlinburg. Due to a large number of tourist attractions in town, Gatlinburg is now also famous for being a popular tourist destination, and one of the busiest locations in Tennessee.

When did Gatlinburg Become a Tourist Attraction? 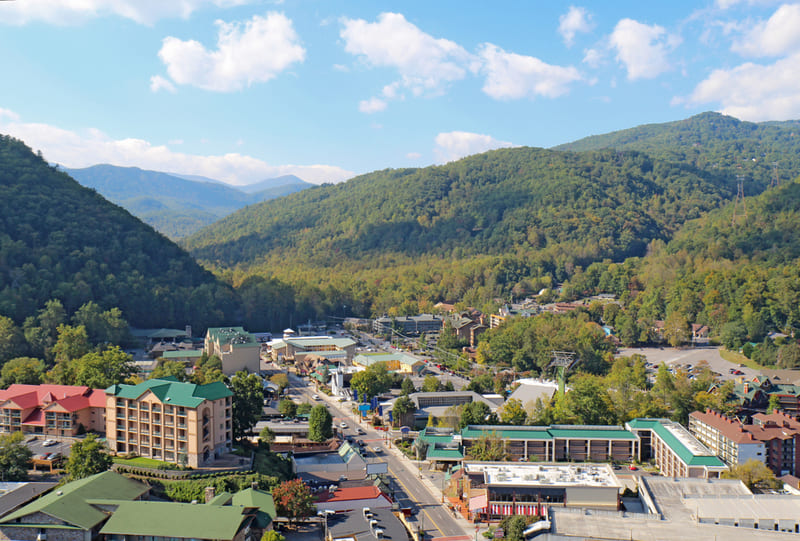 With the arrival of logging companies and laborers around the turn of the century, businesses started to spring up in Gatlinburg to accommodate them.

Are you wondering, “How did Gatlinburg become a tourist attraction after starting as a lumber center?” The mention of the Great Smokies in 19th-century literature had a lot to do with the very first public interest in the town.

Interest in Gatlinburg can be traced back to 1884, when Mary Noailles Murfee—the first notable Appalachian female writer—wrote about the Smoky Mountains in her book, In the Tennessee Mountains, which featured eight stories on the life of the Tennessee mountaineer.

More interest was generated in 1906 when writer and naturalist Horace Kephart wrote about his life near Hazel Creek in Field and Stream and Camping and Woodcraft.

By the early 1900s, Gatlinburg had begun attracting tourists who were influenced by the mention of the area in early literature and viewed the town as a gateway to the Great Smokies. The Mountain View Hotel, the first hotel in Gatlinburg, was opened by Andrew Huff in 1916, who also founded the town’s first sawmill.

Tourism considerably increased when the Great Smoky Mountains National Park was established in 1934. That year, Gatlinburg received an astonishing 40,000 visitors. By the following year, that number had jumped to 500,000.

Businesses continued to expand, and new traders popped up to cater to the demand of tourists. Soon, there was a slew of hotels and restaurants, and locals began to invest in new attractions that would entertain out-of-town visitors.

When Did the Most Famous Gatlinburg Attractions Open?

In 1954, the Gatlinburg SkyLift Park was opened, providing the first designated place where visitors could enjoy sublime views of the surrounding mountains from above.

The park remains one of Gatlinburg’s most popular attractions today and is now the home of the Gatlinburg SkyBridge, which is the longest of its kind on the continent. 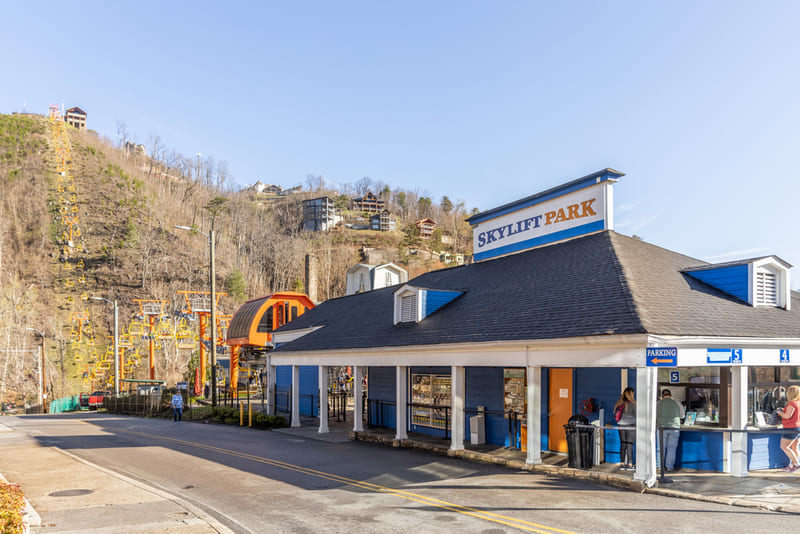 The Pancake Pantry was opened in 1960 by Jim and June Gerding, which was the first specialty pancake house in Tennessee. It still runs today and inspired the establishment of several similar eateries in the state. 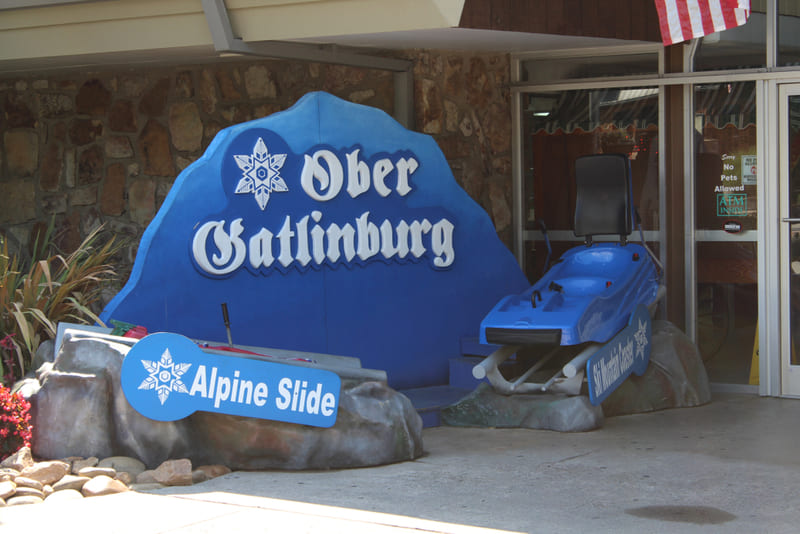 The Gatlinburg Ski Resort was founded in 1962, operating as a private club until 1973, when it was sold and rebranded as Ober Gatlinburg, a Bavarian-themed amusement park and ski area.

The Gatlinburg Space Needle opened to the public in 1970 as the second-tallest building in Tennessee at the time. 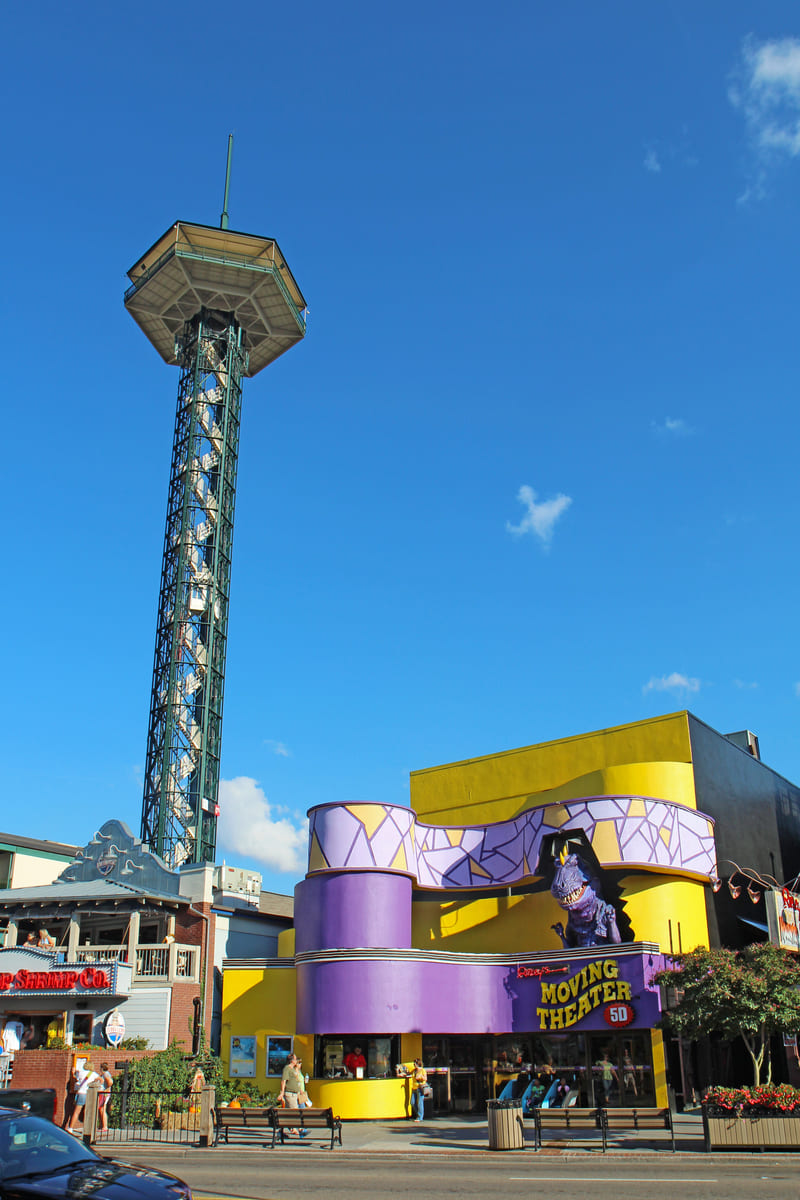 In general, the 1970s brought significant growth to the Gatlinburg tourism industry. The Downtown area was majorly developed during the decade, with the launch of attractions such as Ripley’s Believe it or Not Museum, The Village Shops, and Hillbilly Golf.

This attracted an even wider range of visitors to Gatlinburg, along with Pigeon Forge and Sevierville, the latter of which is Parton’s hometown.

In the 1990s, Gatlinburg launched the event known as Winterfest, which intended to draw in visitors during the winter season with a  festival of holiday lights. More attractions were established in town over the next decade, including the Ripley’s Aquarium of the Smokies in 2000, which remains one of Gatlinburg’s most visited destinations. 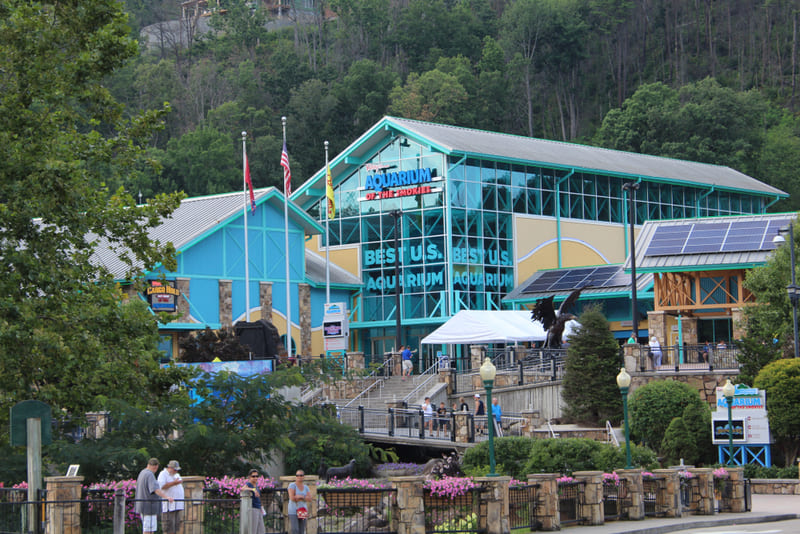 Throughout the 21st century, Gatlinburg has continued to expand its tourism industry and has become increasingly popular with visitors from around the world. In 2017, the 70-acre family adventure park known as Anakeesta was revealed, bringing a selection of more adventure experiences, stunning views, and family fun to Gatlinburg.

Today, it’s estimated that approximately 12 million people pass through the county every year (via Patriot Getaways).

Why is Gatlinburg so popular?

Gatlinburg began as a community of settlers and operated as a lumbering hub during the early 20th century. Once Great Smoky Mountains National Park was established, the town started on the path to becoming a mecca for tourists.

The Gatlinburg of today is popular for several reasons. Primarily, it provides access to the Great Smoky Mountains National Park, which, it’s worth noting, is one of few national parks in the country that is free to enter. Even for those who don’t visit the park, Gatlinburg itself boasts spectacular views of the surrounding mountains.

The bustling atmosphere of the mountain town is another drawing point, allowing out-of-town visitors—especially those from big cities—the chance to experience the unique Appalachian culture.

Of course, Gatlinburg continues to be popular amongst tourists because it is dedicated to providing world-class entertainment for them. The main strip is home to hundreds of outlets, from themed eateries to gift shops to museums and other attractions, all in place to create a global tourist haven.

A History of Gatlinburg – Conclusion

With a captivating history, endless attractions, and a location to die for, Gatlinburg is easily one of Tennessee’s most popular destinations. Is the town on your bucket list? Let us know in the comments!