Gatlinburg in Tennessee is known for its many caves and caverns, especially in the region of the Great Smoky Mountains.

The formations of these geological wonders are believed to date back to the Paleozoic Era when life in the area was first developing. Many of the best caverns in Gatlinburg are famous throughout the U.S. due to the sheer amount of people who visit them.

Some of the most prominent caverns are located in regions of the mountains that also serve as nature reserve areas. Both the Forbidden Caverns and the Tuckaleechee Caverns are two of the main caverns in the region of Gatlinburg where tours operate.

Alum Cave is slightly different in that it is more of a short hike that leads to one of the most photographed parts of the Great Smoky Mountains.

The nearby caves provide exploration opportunities in the mountains around natural geological features that came together millions of years back. Their unique formations have made quite a contribution to Gatlinburg’s reputation as one of the most-visited spots in the state.

These natural cavern formations in the mountains are now considered an integral part of the Gatlinburg experience for many visitors, although many others remain unaware of the beautiful natural sights underground.

As it turns out, Tennessee has more caverns than any other state across the U.S., and they are popular stop-offs for tourists heading to other destinations like the nearby Great Smoky Mountains National Park—where exploration of many caves is off-limits. So let’s take a closer look at some of the best caverns near Gatlinburg.

Top Caverns in Gatlinburg To Visit 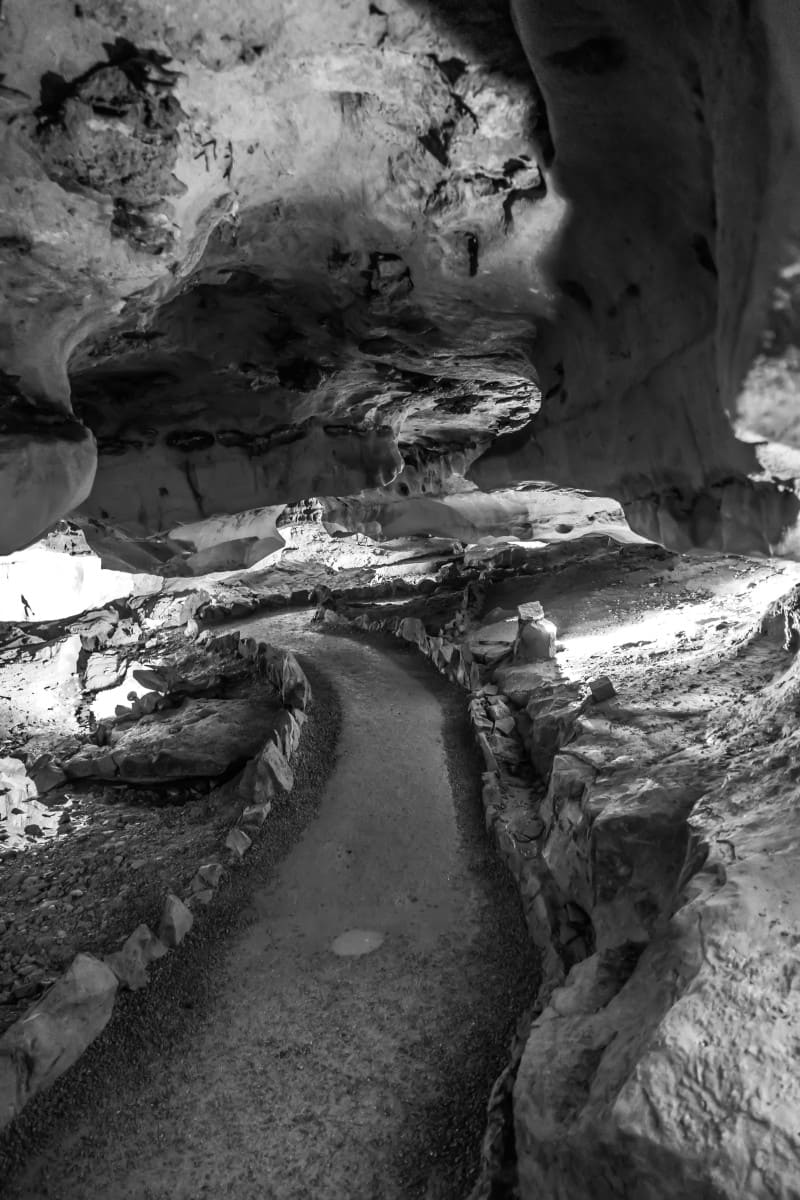 One of the best-known caves in the region of Gatlinburg is Forbidden Caverns close to Sevierville on the outer edge of the mountain town.

This cavern is one among many in the region that were discovered by accident. This was only in the 1930s when a man on the lookout for lumber stumbled across them.

Apparently the entrance was sealed somewhat rapidly upon the discovery, which led to various theories. One was that the owner of the land wanted to keep the wide-open space in its natural state and avoid disturbance by visitors.

Another popular theory is that reports of strange—possibly inexplicable occurrences inside the cave were filtering back from those paying it visits.

The now so-called Forbidden Caverns were re-opened 40 years later by a former explorer of the cave. Apparently this operator kept the caves open for visits for a decade until flood and rainfall damage forced closure.

Still the caverns were opened up again in 1989, and after going through several more stages it was officially reopened as the caves you can venture into today.

Tuckaleechee Caverns is one of the most famous caves on the outer edge of Gatlinburg near Townsend. This place gets so busy during peak periods that cave tours run every 30 mins.

It’s easy to see why as you enter these impressive underground caverns. To begin with you are met with winding steps that take you up to the main section known as the Great Hall.

This grand enclave has 25-foot ceilings and a length of over 100 feet. Visitors can explore the four different chambers of the caverns reportedly used by captured Confederate soldiers during the American Civil War.

The discovery of this cavern is attributed to a 20th-century gold digger, who instead of precious metals found stalactites and stalagmites—literally thousands of them. 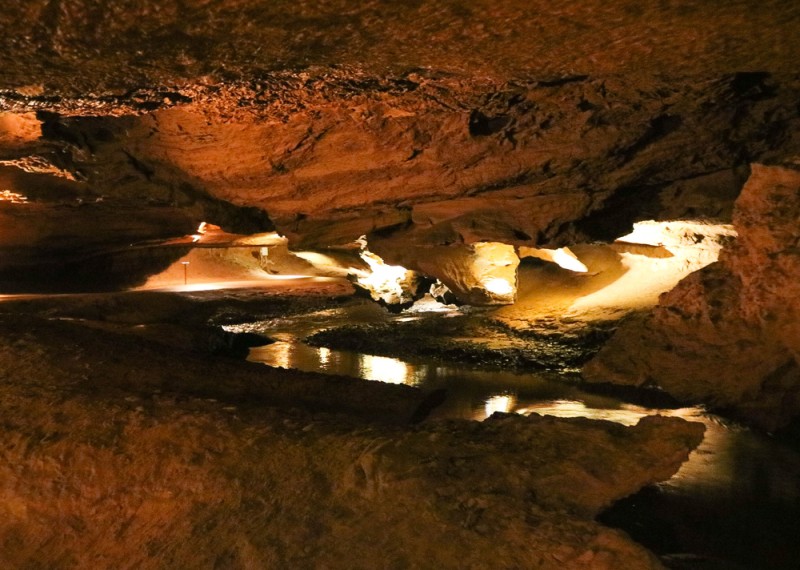 The naturally-formed structures were crafted over thousands of years by water dripping from the ceiling to the pool on the floor below it. And the formations here are indeed made uniquely by the rainfall slowly filtering through the limestone that the cave is part of, creating some amazing underground scenarios.

The Tuckaleechee Caverns are also home to remains of prehistoric people and various artifacts related to them. 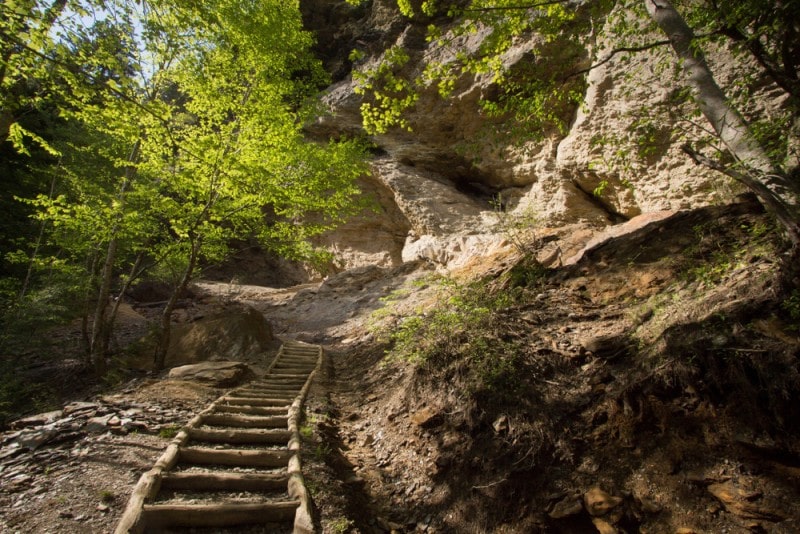 Alum Cave is actually located within the Great Smoky Mountains National Park. In many ways, it is regarded as more of a trail than a cavern or even a cave as such. Nevertheless, it is a well-worn route and a popular spot.

Hikers should be prepared for a few steep sections along the trail which take on average between one and 3 hours.  The relatively short route leads to the heart of Alum Cave Bluff.

The trail is a 4.4-mile roundtrip and mostly passes through forested areas that may be covered by snow or ice during the winter months.

Located on the outskirts of Gatlinburg, Bear Cave is one of the more fascinating caves in the region.

The fact that the cave’s formation is considered one of the most picturesque in the region is one of the things that help make it a hugely popular attraction in the Gatlinburg zone.

The Bear Cave provides some valuable insights into the processes involved in the formation of this and other caves like it over time. Bear droppings are commonly spotted in and around the area, and there are apparently a few other types of interesting life species under study today that have cropped up there over time.

Green Algae that feed on bat guano for instance has been found in the cave, and it is now under scientific study. An anemone-type creature that in turn feeds on the algae has also been found there. 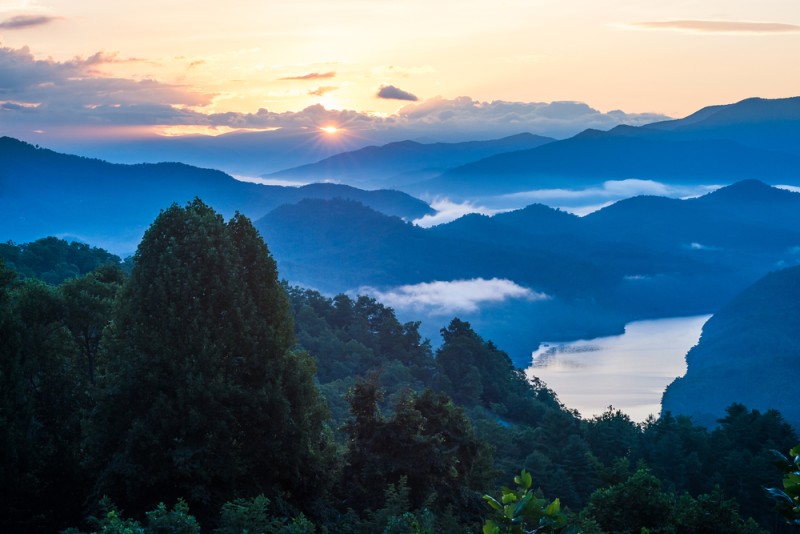 The Great Smoky Mountains National Park is accessible within a 10-minute drive from central Gatlinburg.

Some areas include caverns and caves that are open for visitors like Arch Cave. Others like Bull Cave remain closed to the public due to the fact that endangered species are known to hibernate here.

Other caves like Fairyland Caverns (check out a video of the enchanted caverns) and the Frozen Niagara Caverns do open for tours but not that regularly due to issues with water.

The Smoky Mountains have plenty of caves, trails, and other fantastic natural wonders. One of the reasons caves are largely off-limits in the park is the safety factor. And it is worth noting that some of these caverns are somewhat on the remote side and are really only suitable for experienced hikers to enter.

One of the caves near Clingmans Dome was formed by Ice-Age water erosion and closed off naturally with stone when it faced away from a former river region.

There are various types of small wildlife species like bats, raccoons, opossums, and skunks living in the area, and a few caves within Cades Cove were also formed from water erosion over time.

In some of the caves there remains evidence of former human habitation. One such cave was believed to be a bear den due to its size until human activity was discovered there too quite recently.